Video games have become a multi-billion-dollar industry, even recently overshadowing cinema as the globe’s go-to entertainment medium of choice.

Training to become a video game developer gives you access to this thriving industry, letting you be creative in the process, while gaining key transferable skills.

On this course, you’ll get an introduction to the major concepts of game programming, including user input, rendering and collision detection. You’ll take a detailed look at core programming concepts such as loops, conditional statements and data storage. 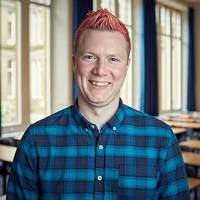 I am a lecturer in Games Programming at Abertay University. My teaching focuses on the fundamentals of games programming and graphics programming.

Abertay is a global leader in computer games education.

An introduction and a short overview of what will be covered during the course.

Discussion of the Game Loop, the core of every game.

Discussion of how user input is captured and handled.

Discussion of the core concept behind how we render the graphics of a game.

A technique on how to control timed processes such as movement or animation is discussed.

What have you learned? DISCUSSION

The creation and rendering of 2D sprites. Along with how transparency is achieved.

How sprite animation works, constructing and controlling the animation.

How movement and forces such as gravity works in games.

Some of the core methods of detection when game objects collide are discussed.

Games you have played that use collision detection? DISCUSSION

A common technique for building and rendering large and complex levels.